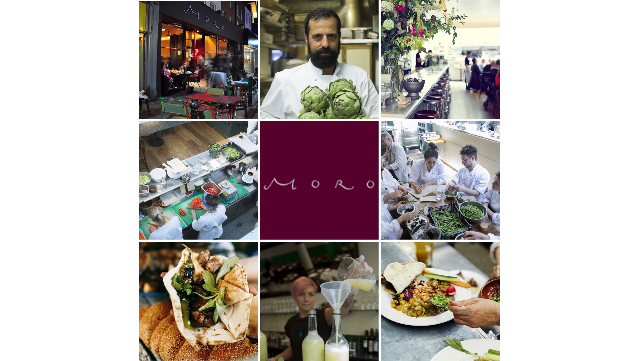 Moro is owned by Sam and Sam Clark and has been a stalwart of the London restaurant scene since 1997.

It is highly regarded for bringing the Moorish flavours of Spain, North Africa and the Eastern Mediterranean to London.

The seasonal menu changes every 3 weeks which encompasses new creative dishes alongside Moro classics. We bake sourdough daily in our wood oven, make yoghurt daily and grill over charcoal to give the food its distinctive flavour.

It was an unusual route which led to the establishment of Moro: two cooks, Sam and Sam Clark, shared a desire to discover the abundant flavours of the Southern Mediterranean. They married, bought a camper van and set off on a journey through Spain, Morocco and the Sahara, learning, observing and tasting along the way.

Moro opened in spring 1997, and quickly established itself as an important part of the close-knit culinary community of Exmouth Market. Time Out named it 1997’s best new restaurant and in 1998 it won the BBC Good Food Best Restaurant Award.

In 2010 the Sams opened Morito, the popular tapas bar right next door to Moro and then added to the Morito family with Morito Hackney Road in 2016.  In 2016, Sam and Sam won Outstanding Contribution to the Industry in the London Restaurant Festival Awards.

The small team is friendly, supportive and hard-working.

There is also the opportunity to work in Morito, the sister tapas and mezze bar/restaurant next door.