This article covers the synergy between 3 passions of mine, Rugby, Hospitality and Business. Forgive me! 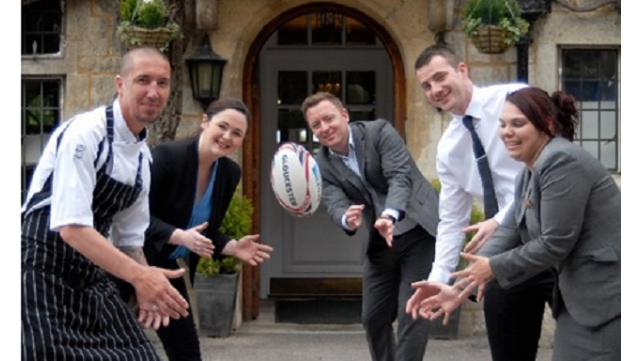 This article covers the synergy between 3 passions of mine, Rugby, Hospitality and Business. Forgive me!

“Rugby is a game for animals, played by gentlemen”. At every interval between junior play and professional leagues, respect is at the heart of rugby. All of the fans know it and all of the players demonstrate it. But what effect has this had on rugby as a whole and what can the hospitality industry learn from this?

In this article, the Hospitality Jobs UK team explain how respect has benefitted both rugby and football, and what lessons the hospitality industry can take away from rugby in particular.

The three cornerstones of respect in rugby

Although a culture of respect is deeply rooted in rugby, there are three main people/groups towards whom it is aimed. These people are:

It doesn’t matter how small and old the head coach is, they just always seem to have an aura of “immovable object” about them. That’s because they have years of rucking in the rain, mauling much bigger men, and tackling tough lads under their belt. Whether you are the superstar captain or the new one on the team, if the coach says “jump”, you say “how high?”.

This one is broken down into two parts, there’s your team and the opposing team.

The respect shown to your teammates helps them recover from a rough game, develop their skills, and enjoy the sport. We all have off days but with the right encouragement, any dry spell can be left behind like a prop chasing a winger.

Respecting the other team is what sets rugby apart from every other sport in the world. After knocking the snot out of one another in what is essentially an 80-minute fight with a ball somewhere in the middle, the ability to shake your opposite number’s hand is the epitome of respect in the sport.

Professional rugby has produced some spectacular sights throughout the years. However, no amount of try-saving tackles can top seeing a 6”5, 130kg monster towering over a small referee, listening intently, while he receives his telling off. “Sorry sir” is, and always has been, the most important phrase on the pitch.

How a culture of respect moves the sport forward

Because respect is one of the defining characteristics of rugby, more and more people are drawn to the sport each year. This means the pool of talent is increasing, the fanbase is growing, and these people are seeing the benefits of exercise and competition.

The three cornerstones of respect in hospitality

In the same vain, to get the most out of any hospitality role, employers should be working towards creating a culture of respect. In order to achieve this, respect must be shown and demonstrated both to and by these people:

As the leader, any manager must respect their employees. If your team are showing a lack of effort, it might be because they don’t believe that you appreciate their efforts when they do try. And, in return, staff members should listen to their managers, learning from their experience in the meantime.

Catering is accepted as being one of the most stressful jobs that you could ever have. If you don’t respect your colleagues in this atmosphere, a kitchen turns into a ticking time-bomb. When tensions are high, knowing that you and your peers share a mutual respect of one another’s craft is essential to producing something high-quality.

Last but most certainly not least, respecting the customers that you serve is a vital role in any business. Respecting your customers means that you are unwilling to serve them something sub-par. It means that you don’t want to let them down. In return, they’ll come back time and time again – keeping you in business.

The benefits of creating a culture of respect

When all of these different elements of respect work together, it can be the difference between somebody starting their first day and coming out of their shell immediately and them folding under pressure.

It is important to remember that respect needs to be shown at every level of a business if you really want to get the most out of your staff and your career. It doesn’t matter what the hierarchy structure of your business looks like, respect should be a level playing field.

Forgive me adapting a previous article – it’s as relevant now as it was last year! Good businesses are built on good behaviours, strong character and positive attitude. Yes values are key and purpose is crucial.

Be passionate and true.